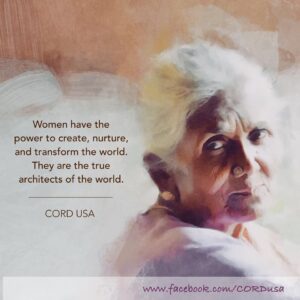 By focusing on development (teaching people to earn a living) as opposed to welfare (e.g. donating food); CORDUSA has built a sustainable and replicable model that has been successfully done by other groups.

The key success factor of CORDUSA is their motto of Active Participation. The villager has to be willing to take the first step to transform his/her life and CORDUSA will take 5 steps forward to assist the person.

Reaching out to each individual family and supporting their progress is slow to develop, but the ripples create multi-directional growth and sustainability. Infusing money and other handouts is easy; however generating hope and confidence takes time, persistence, and belief!

Belief in one’s ability to motivate another to change life-long thinking patterns and habits. CORDUSA enables the poor to transform their lives through programs driven by themselves on the simple premise that inspiration from within brings out the best in everyone. That’s what makes the program successful!

• 2015 – CORDUSA is awarded the Top-Rated Non-Profit by GreatNonprofits, the leading provider of user reviews about nonprofit organizations for 4th year!

• 2014 – CORDUSA is awarded the Top-Rated Non-Profit by GreatNonprofits, the leading provider of user reviews about nonprofit organizations for 3rd year!

• 2013 – CORDUSA is awarded the Top-Rated Non-Profit by GreatNonprofits, the leading provider of user reviews about nonprofit organizations for 2nd year!

• 2013 – Dr.Meera Krishna, Project Incharge of Branch-Siruvani honored by the National Commission of Women for her outstanding work for women empowerment.

• 2012 – CORDUSA is awarded the Top-Rated Non-Profit by GreatNonprofits, the leading provider of user reviews about nonprofit organizations.

• 2012 – CORD branch at Siruvani was awarded for Social Service by FICCI Ladies organization.

• 2012 – CORD at Lathikata was appointed by MORD to audit MGNREGS in its block.

• 2002- Recognition of Trust work in the field of Women’s Empowerment by the National Commission of Women, one of 10 recipients of the Nation.

• 2001-Felicitation by NABARD and Chief Minister of Jammu & Kashmir for SHG promotion in J&K.

• 1992 – Selected by the Government of India to represent India in South Korea for Women’s Development and Family Planning as the NGO representative of India.

CORD USA Inc does not exclude, deny benefits to, or otherwise discriminate against any person on the ground of race, color, national origin, age, sex, religion, or disability in admission to, participation in, or receipt of the services and benefits of any of its programs and activities or in employment therein, whether carried out by CORD USA Inc directly or through a contractor or any other entity with whom the CORD USA Inc arranges to carry out its programs and activities.